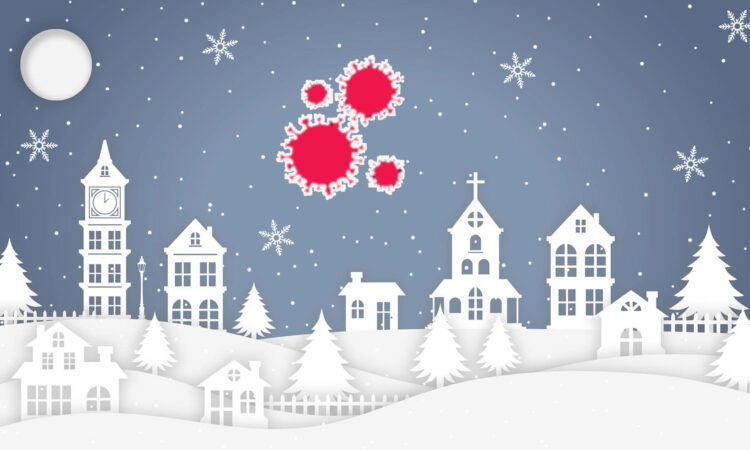 “Peace I leave with you; my peace I give you. I give not as the world gives.

At the beginning of the new year, I wish you all peace, joy, health and blessings in 2022!

When relatives and friends bid farewell to the old year and exchange blessings of the New Year, I also would like to wish everyone a happy new year.

Anxiety and distress caused by the Covid-19 Pandemic has deeply enveloped the world. It has been 2 years since the first reported case in the world. It was hoped that after the introduction of the vaccine, this Pandemic can be temporarily stabilized or even controlled.

Unfortunately, reality is contrary to our wishes. The South African mutant virus

– Omicron –  has appeared more than a month ago,  and it has swept  violently around many countries in the world with the number of cases leaping geometrically.

Just a few days ago, the number of confirmed cases in the United States surged by 580,000 in a single day – setting a new high and a global record. As well, the number of confirmed cases in the UK has exceeded 100,000 in a single day for many days. Meanwhile, it has rebounded rapidly in Canada, including more than 10,000 newly diagnosed patients daily in Ontario and Quebec respectively. Many provinces have quickly geared up preventive measures to combat the Pandemic.

It was reported on January 3, the number of new infections in Ontario have dropped for

two consecutive days –  but still recorded 13,578 infected people in a single day, as well, over 10,000 daily cases have been reported for some days.

On January 1, New Year’s Day, there were 18,445 new cases, a record high! Authorities further stated that the actual number of infections far exceeded this because the virus detection (PCR) is lagging behind significantly.

Provincial health officials and medical experts have stated many times that the Omicron variant is highly contagious although it seems to cause  less  severity compared to the Delta variant.

While there was no significant increase in hospital and intensive care unit (ICU) admissions before the New Year, the number of new confirmed cases continued to rise – 1,232

In view of the continual record high cases for several days, Ontario Premier Doug Ford convened an emergency cabinet meeting on Sunday afternoon, (Jan. 2) to cope with the rapid rise in Omicron cases.

The meeting discussed counter measures and announced on the morning of January 3 that Ontario will return to its Second phase of Economic Re-start:

Prohibiting loitering in the shopping malls;

Proposed time frame for the above measure will be for at least 21 days.

In addition, schools in the province will resume online remote learning starting Wednesday (Jan 5) until January 17.

The province also asks employers to arrange for employees to work from home.

The number of people indoors – in libraries, weddings, funerals and religious events – will be limited to half of their legal capacity. Hospitals are also suspending non-essential / non-urgent surgeries and medical procedures.

For the provincial government’s decision to re-implement these measures, Ontario people expressed their helplessness and understanding. However, some believe that these measures are implemented too late, probably having been postponed until after the Christmas and New Year holidays that allow families and friends to gather.

Meanwhile, the catering industry is very dissatisfied, saying that the provincial government is again lacking consultation. Under such circumstances, dine-in is banned again in a short notice, ridding the industry of its dim hope of revival.  A severe winter with a new wave of closure is apprehended.

Another worry is that Ontario is following the lead of several provinces in changing the direction of virus testing (PCR), saying that its detection capacity has reached limit, and those who have already obtained “positive” from the rapid test do not need to do PCR testing again for confirmation.

The Provincial Education Department has also suspended the collection and reporting of confirmed COVID-19 cases in schools and day care centers.

In addition, the provincial government announced the reduction of the quarantine period from ten days to five days  for fully vaccinated persons who happen to get infected.

Ontario Chief Medical Officer Dr. Kieran Moore explained that data has shown that about 40% of the virus transmission occurred two days before (the infected person displays) the onset of symptoms and during the first three days of symptoms.

Hence there is no need for further quarantine five days after symptoms and 24 hours after patients have shown obvious signs of recovery.

He said this move will help alleviate staffing shortages across industries, most notably the healthcare system.

However, many people questioned whether self-isolation for 5 days is enough, and they pointed out that without a PCR test to prove that patients have fully recovered, patients may continue to accelerate the spread of the virus.

Some medical experts have expressed concerns.  Since PCR testing is not available to the general public, they would have no clue to whether they are infected.

When schools did not collect and provide the data of confirmed cases, how then could the authorities accurately know the number of new confirmed cases without which it would not be conducive to the management of the Pandemic. It is difficult to formulate timely and appropriate measures to combat the Pandemic when its comprehensive development is not well-grasped.

It has been nearly two years since the outbreak of the Pandemic, and Ontario is locking down   its cities again. It seems that the residents of Ontario have experience to deal with this situation, and they may even tackle it with familiarity. However, the Pandemic caused by the Omicron variant is faster, more urgent and more serious than the previous waves.

Don’t take it lightly, but you don’t need to panic exceedingly, like a bird frightened by a bow. In an article last year, this author alluded the Pandemic in 2021 to the second half of a” game” (2020 Pandemic). Likewise, Pandemic in the year 2022 might be an “overtime game”.

The situation is more compact now, and how to   maneuver between “offense and defense” permits no mistake.

Everyone must continue to pray for the Pandemic.  Do not relax. Individuals must do their part in prevention. Get vaccinated and obtain the booster as soon as possible.

I sincerely hope that the Pandemic will be over soon.

May God bless us with health and safety in body and mind as we experience more of His Grace   amidst our fight of the Pandemic.

“I tell you these things so that you may have peace in me. In this world you will have trouble; but you can rest assured that I have overcome the world. (John 16:33)