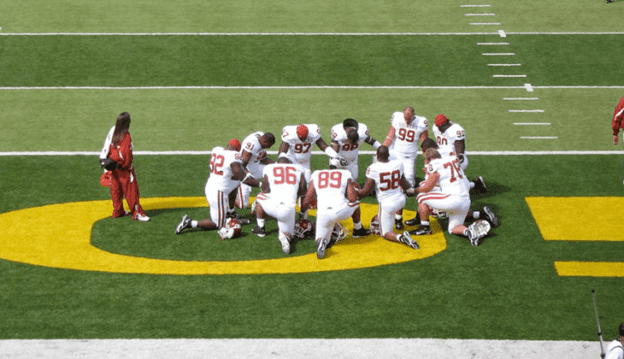 In the state of Washington, a high school football coach named Joe Kennedy made a promise to God in his prayer before a game in 2008, “I will pray after each game, whether winning or losing, to thank God for each teammate and let me be a coach.” (www.foxnews.com/opinion/football-coach-joe-kennedy-prayer-sideline-fighting-game）He expresses his thanks to God is to walking to the center of the field after each game, kneeling, and saying a short thanksgiving prayer. For seven years since that promise, he has courageously expressed his faith testimony and received praise from the students and staff. However, the school district was alarmed and warned him that he could only pray on his own and was forbidden to lead the football players in corporate prayer. Later, they implemented an added restriction that prohibited Kennedy from praying where others would see him. Eventually, during a football game in October 2015, Kennedy was issued a final notice. He would be ordered to resign if he insisted on kneeling and praying in the center of the field when the game concluded. However, Kennedy upheld his promise to God and prayed publicly at the game—thus ending his coaching career as the curtain fell on the football game.

His termination was not because of his inability to fulfill his work duties, nor was it a moral or legal transgression. His prayer in public expressed his faith, causing no harm or loss to anyone. So why does a country that values freedom of speech and religion have a statute prohibiting educators from praying in public? Does that mean pastors and coaches must keep their religious beliefs as an undiscoverable secret? Once a student witnesses a public declaration of faith, would it be considered a serious offense? How can a simple word of prayer be punished with employment termination? Does that mean public prayers are only for religious leaders or ceremonial gestures such as presidential inaugurations? Joe Kennedy paid a hefty price, but he insisted on his testimony and stance on public prayer and the belief in the Constitutional right to freedom of speech and religion. With the help of the First Liberty Institute, he brought the case to the local courts, ascending to the Supreme Court for seven difficult years! Finally, on June 27, 2022, Court decided in favor of Kennedy 6 to 3, stating prayers on the field were an expression of religious freedom. Therefore, the court overturned the ruling of Kennedy’s dismissal. Though Kennedy lost his job, he won the legal battle and remains untarnished and innocent. His seven years of prayerful testimony earned him seven years of litigation and lawsuit. These fourteen years of endurance exemplify God’s glory and the victory of His follower’s faithful prayers!

In the Bible, there was a prophet named Daniel. Even though he was a high-ranking official, he still insisted on prostrating before God and praying three times a day. Later, this aroused the jealousies of his peers and tricked the king into ordering those who prayed to other gods to be thrown into the lion’s den. Daniel continued his prayers.  And he was thrown into the den — with his employment terminated and his life in grave danger! God sealed the lions’ mouths, and when the king visited the second day, the king said to him, “When he came near the den, he called to Daniel in an anguished voice, “Daniel, servant of the living God, has your God, whom you serve continually, been able to rescue you from the lions?” (Daniel 6:20), but Daniel replied, “My God sent his angel, and he shut the mouths of the lions. They have not hurt me, because I was found innocent in his sight. Nor have I ever done any wrong before you, Your Majesty.” (Daniel 6:22) Not only was Daniel safe and unharmed,  “At the king’s command, the men who had falsely accused Daniel were brought in and thrown into the lions’ den, along with their wives and children…” (Daniel 6:24) This illustrates what happens when the wicked try to harm the righteous, but people rarely learn from the past.

There was not Daniel, and the only Hebrew prophet persecuted for his faith. A group of jealous religious leaders framed even God’s only son Jesus Christ. Though they were devout believers of God, they couldn’t tolerate being reprimanded and having their pride wounded. When crowds of people began to follow Jesus, these religious leaders were worried about their loss of status and authority. They hoped to use this alliance to eliminate a so-called “religious threat by aligning with the Roman Empire.” Jesus’ resurrection has birthed a new century of global evangelism.

Even though Jerusalem in 37 AD destroyed, the mighty Roman Empire faded in its glory, and Jesus’ followers reached all corners of the world. God’s love and charity are unstoppable. Though the wicked might appear to be the victor, God’s justice prevails, and his judgment will not delay. Dear friends, “Seek the Lord while he may be found; call on him while he is near. Let the wicked forsake their ways and the unrighteous their thoughts. Let them turn to the Lord, and he will have mercy on them, and to our God, for he will freely pardon.” (Isaiah 55:6-7)