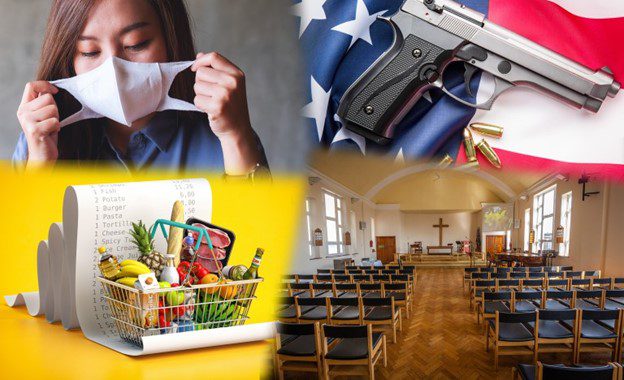 Why is the United States full of crises these days?

The Aftermath of the Pandemic

Since the outbreak of coronavirus, our worldwide statistics showed over 529 million confirmed cases and over 8.39 million deaths as of May 23, 2022. Here in the U.S. we have exceeded 1 million deaths as of May 13, 2022 on which the U.S. government flags were lowered at half-mast in tribute. (Note 1) Over 200,000 children have become COVID-19 orphans due to their parents’ or guardians’ deaths. (Note 2) According to WHO’s 2022 report, people felt desperate and broken-hearted due to long-term isolation or death of family members with whom the opportunity to spend the last moment with a sick loved one was denied. Other problems were: business closing, layoffs, financial difficulties, children stuck at home for school, limited space for family activities, frequent quarrels and conflicts, and constant fear of being infected…. As a result, worldwide anxiety and depression have significantly increased by 25%. WHO even concluded that mental problems were far higher than physical illnesses. (Note 3)

The Democratic Party is in power, with a left-wing political platform, overturning all Trump’s policies such as energy issues and building a border wall. In contrast, Democrats opened the border (leading to a large number of illegal immigrants and drugs flooding into the U.S.), sharply raised taxes, liberated abortion restrictions, expanded of homosexual, bisexual and transgender rights, advocated Critical Race Theory and Cancel Culture, and even started sex education in schools from the third grade of elementary school. Our society is full of hidden dangers. (Note 4)

The tragic killing of George Floyd in May 2020 detonated the worst riot in the United States. The “Black Lives Matter” movement quickly spread across the states, leading to the defunding of the police. According to the FBI, violent crimes such as mass shootings and assaults continue to increase. Homicides hit a record high in 2020, rising by nearly 30%, and in 2021, another 5% more. (Note 7)

Free media has not been reporting all of these crimes and some democratic senators even claim that these are fabricated. (Note 8)

Our new NYC District Attorney announces that he would relax the pursuit of certain crimes. As a result, NYC crime rate has increased by 32%, compared to the same period in 2021.

U.S. Supreme Court draft opinion leaked: Justices will vote to overturn the 1973 Roe v. Wade case. The government decides whether to restrict abortion. Chief Justice John Roberts confirmed that the leaked draft was true, but was not final. However, if the “Roe v. Wade” case is overturned and the state government regains the right to abortion, about 26 conservative states in the United States will have different levels of abortion bans.

After the draft was leaked, pro-abortion protesters staged massive protest marches on the streets of major cities and in front of the Supreme Court. They protested day and night in front of the conservative justice’s home, putting pressure on the justice to change his mind. Low national morality is evident.

Senate Democrats, in order to uphold the legality of abortion, will immediately pass the Women’s Health Protection Act, the most radical abortion bill in U.S. history, which is more aggressive than Roe v. Wade:

The above several crises in the United States are just the tip of the iceberg. You may agree that the American society today is riddled with crises and returning to the true God is urgent.

So how do we return to God? God has proclaimed: “…. if my people, who are called by my name, will humble themselves and pray and seek my face and turn from their wicked ways, then I will hear from heaven, and I will forgive their sin and will heal their land.” (2 Chronicles 7:14)