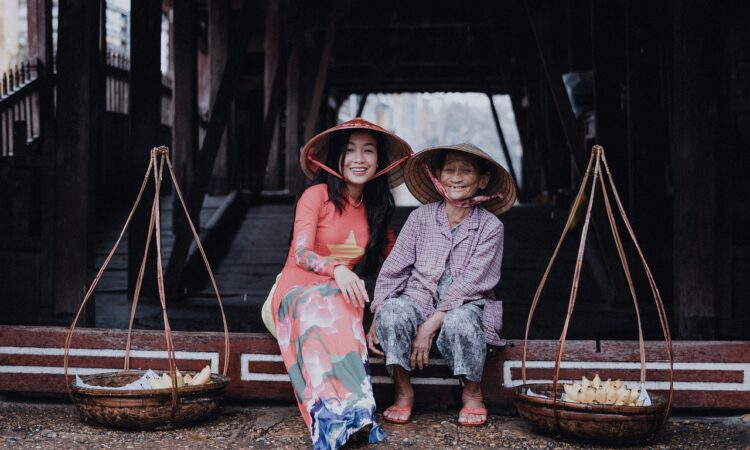 Life-threatening bullets were flying around her while the heart pounding sounds of bombing deafened  her as she raced and dodged relentlessly to the small deserted church… to pray.

Praying used to be a blissful time when fellow Christ followers on this primitive island offered their pure hearts to their Holy GOD.

But the brutality of foreign invaders in the 1940’s had made this usual practice impossible. The war had lasted for more than eight years. The majority of China was in shambles, not even the small islands could escape the horrors of war.

Amazingly this woman was singing praises with bubbling JOY, some 40 years later in the 1980s, to me, a young visiting overseas reporter.

The arrival of Western missionaries since1840’s had brought the first piano to their island and China with Worshiping hymns.

In her eighties, this woman appeared as a plump figure clothed in traditional 2-piece black garments (long sleeves tops and pants).

There were no traces of bitterness nor fear on her rugged yet undoubtedly “glowing” face that reminded me of Moses after he met GOD on Mount Sinai.

But history had unfolded decades of heart-breaking foreign invasions, civil wars and subsequent closure of the whole country to Western influence.

This old woman and her faith, mistaken by many, even today, as a western religion, “shone” through unimaginable trials and tribulations.

She recalled how she gathered her 3 generations at night, hiding carefully from neighbors’ prying eyes and ears, digging up the Holy Scriptures which were painstakingly hidden under floor tiles.  A candle was precariously lit as the family read the Holy Word of her Almighty God nights after nights.

Father GOD is forever faithful to HIS promises to protect HIS loved ones. This woman, her children and grandchildren were never discovered nor persecuted for such “anti-atheist” practices.

“MY LORD REALLY LOVES ME,” she said repeatedly. Her rejoicing is a witness to others.

Abandoned by former earthly regimes, hidden under a newly formed government that claimed to liberate, she told me yet of another miracle of restoration.  Time now flashes forward to early 1980. The country had employed open policies that promoted Modernization.  This was when I was allowed to travel as a roaming reporter from Hong Kong for an English newspaper.

Humbly and carefully, I was told how this joyous old woman’s grandson lost his working bicycle. His family had gotten a loan to purchase this vehicle for the young man to do delivery work during the day while attending classes at night. One day, the bike was stolen outside a store after the young man went indoors with his delivery.

“I gathered the whole family to pray. Next morning, the thief turned himself in with the bike at the public security bureau”, the old woman recalled with indescribable thanksgiving.

We outsiders might not be able to appreciate the significance of this event.   Back in the eighties, theft was considered a serious crime with severe consequences.

Pure reliance on her trust-worthy Savior was answered by miracles after miracles.  Her decade-long faithfulness to her Lord has borne fruits among her descendants.

Where are we in our walk with Christ? Perhaps we have experienced great JOY produced by great trust amidst trials and tribulations. Perhaps not yet.  Perhaps the JOY comes and goes.

The Bible truly nourishes the hungry and frightened souls. HIS WORD never fails, indeed. May we treasure it in good times, and bad times.

Then I turned my eyes to an extremely frail figure.  An elderly male priest who had not uttered a single word throughout the interview.

Before I bid farewell, the priest held out an old plastic cup, a 6 oz red cup with fading color and peeling rim that could have touched countless lips throughout the years.

In silent observation, this cup was evident of great poverty during which Communion continued until the church was locked down and the body of Christ was dispersed, perhaps even arrested and imprisoned.

The image of this cup has been engraved in me. Whenever I have the privilege to freely partake in the Lord’s Supper overseas, not only do I celebrate our Risen LORD, but I also remember the thousands and millions of brothers and sisters throughout history and still today who have persevered due to their sweetest intimacy with Christ.

My heart is truly at ease.  For Our GOD reigns.  From everlasting to everlasting.

May you all enjoy the Bible more than any well-written novels or essays.  May Living Water overflow with bubbling JOY that surpasses any champagne.

May we be humble and content in whatever state we are in.  For the LORD’s LOVE never leaves us.

GOD bless us all who are just a prayer away from HIM.  HALLELUJAH ！