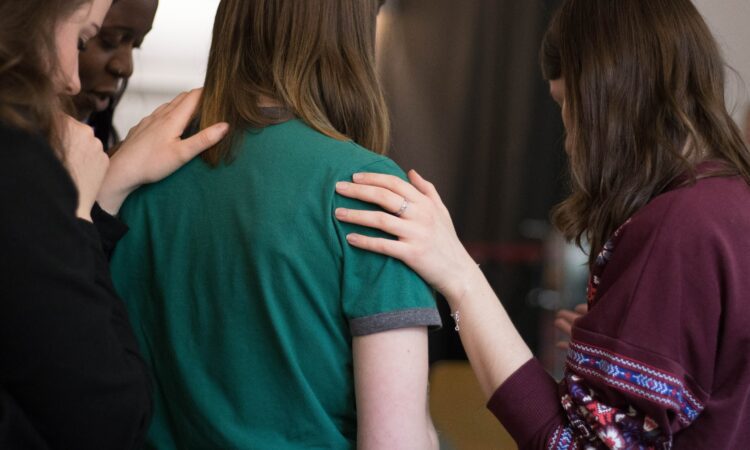 2 Kings 4:1-7 in the Bible records a story of the prophet Elisha helping the poor widow.  The prophet Elisha had a servant, after he passed away, only his wife and two sons remained.  Due to his great debts that he could not repay, he faced that his sons would be taken away as slaves.  The wife could not allow that, and she begged Elisha hoping for a turnaround.  When Elisha faced the helpless widow, he asked, “How can I help you? Tell me, what do you have in your house?” The widow said, “Nothing except a small jar of olive oil.”

“Nothing?” It could be seen that the widow’s feeling at the time seemed to be desperate, and it appeared that she could not think of any other way to relieve her troubles.  She might be thinking that if she already had lost her husband, and if she also lost her sons, how could she carry on with her life?

Xiaoqing, who was sitting across from me, was dressed plainly with a ponytail, and she looked no different from an ordinary housewife.  After the divorce, she was like this widow, raising her young daughter alone.  Life in Hong Kong was not easy; Xiaoqing was tough to endure hardships and she endured much to do the heavy works at construction sites.  Her body was exhausted, but the salary was not enough to match the high rent, and life was quite difficult.  At that time, she met a female from the same village and was suggested that to work in the sex industry.  In the beginning she could not accept it, but she was slowly persuaded.

Speaking of the previous work in the sex industry, she really had the bitterness, “Actually I hate men… because my first time was not voluntary but forced.  That man said he loved me and then once lied to me to go to a place, and then he raped me.” Although it was a matter of many years ago, her eyes became red again when talking about it, “I cried and told my parents about the incident, but they did not want to make a big deal out of it for saving their face.  They also persuaded me as it already became a fact, it was better to marry him.  Anyway, he liked you and he was not a bad guy.”

The author got a little excited, “If he was not bad, then he should have known to respect women and to respect you.”  This reminded me of places in Africa where I had heard before, if a man liked a girl, he would first sexually assault her, then she must marry him.  Unexpectedly, the woman sitting across from me had experienced such absurdity.
Xiaoqing nodded, “I know, but I was quite confused at the time.  I felt that I might not be wanted by anyone, and I did not have anything.  I had to listen to my parents and got marry.”  Living with someone who did not know to respect her, eventually it would not be happy.  Xiaoqing gave birth to a daughter after the marriage, but she could not bear to live with the man who hurt her, and finally chose to divorce.

The author heart ached for her, “You hated men so much, but you served them because you had to support your family, how could you live on?”

“It’s painful!”  Tears flowed down her cheeks.  “It’s really painful, I could only keep telling myself that it would pass soon…. Although I did not know when it would, I still felt lucky in retrospect, because I met Alice and Lai in less than a month (workers at the organization), they came to visit me and helped me find a way.  I thought I had nothing and had this only way to choose from, so I chose to join this industry.  But Alice and the others helped me very much and did not look down on me.  They also taught me to pray, I then knew that I did not have nothing.  I was very happy to meet a group of sisters here and I could talk to them wholeheartedly.”

I turned around and asked Alice, “You have been in contact with a group of women who work in adult industry establishments, what do you do for them?”

She said, “Nothing much, I just want to be friends with them, let them know that the most important thing is to have Jesus in their lives, because everything can be asked in Jesus.”  Just because Jesus is very important, Alice accepted from God a few years ago to build a spiritual home for this group of women, so the gathering called “Love Go Home” was established.  May these women eventually return to God’s house and rebuild the valuable identity of being precious daughters of God under the healing of the Holy Spirit.

How can you help this group of women?  Please at least pray for them and ask the Lord to grant us His eyes on them.