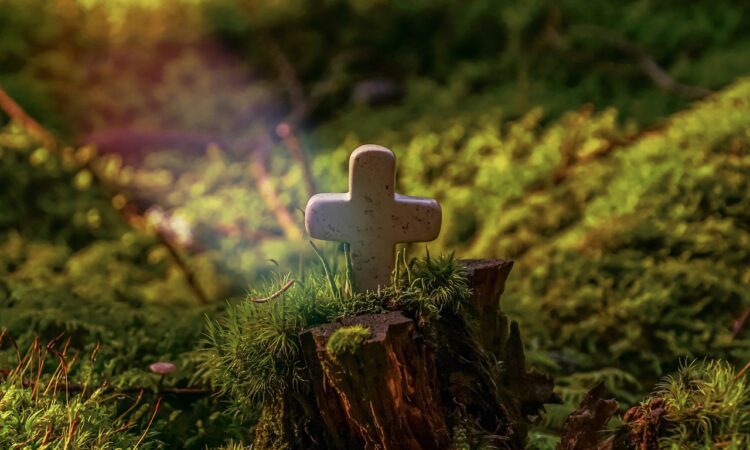 Peace to you, Brother Xiaojun!

I still remember in my previous letters, I mentioned that I have started to go to church regularly. Not that I have already known God, but I was intrigued by the faith in Nancy Clay’s family and how they lived out humility, love, generosity, optimism, diligence, peacefulness, and joyfulness, and how much they love God. I know it has to do with their faith.  So I started attending their Sunday worship, Sunday school, small group fellowship, and family gatherings to explore how they have such lives. That is what I wanted and have been pursuing in my heart.

However, in Sunday school class, I was having more and more difficulties understanding some of the content of the Bible. So, I kept asking questions. They were able to answer some but not all. They could explain some of my questions vaguely but were barely convincing.  I remember I had two questions they couldn’t resolve. One was, “How can a virgin conceive and give birth to Jesus?” The other was, “How can someone who is completely dead and resurrected? They couldn’t answer these questions. As a biology student, I did not rationally and scientifically understand and believe these historical events.

However, Nancy’s family was always caring and helpful to me.  They have been praying fervently for me every day. As I was debating more and more with them, they were the same and continued to be candid with me. I knew they couldn’t give clear answers to these two questions, but they would never be angry or walk away from me. In two and a half years, I quickly finished school and was leaving for Toronto. They often asked me if I would believe in Jesus, and I said I would believe Him when they could give answers to those two questions. I found the character revealed in their lives is the fruit of the Holy Spirit, and these often touched me. I seemingly believed in their invisible God but locked in my pride, scientific knowledge, and reasons for escaping and rejecting God.

In January 1997 I drove out of Alabama. It was a Sunday. Many brothers and sisters from the church visited my residence address to pray for me and bless me before Sunday Service. As I rolled over the mountains of Tennessee and into Kentucky, a snow belt was in front of me. More than a meter of snow was on the sides of the road when I entered Ohio. After driving for more than ten hours, I was going to spend the night in a small town named Ottawa in Ohio. It was past nine o’clock in the evening, a snowy night, and the snow on the roadside was as high as my car. There was no GPS, no cell phone.  I drove slowly to look for where I was going. All houses were far from one another on the road, and it was late at night. Suddenly, I found my car was stuck in the snow, and I couldn’t reverse. It was dark and noiseless at night, a whisk of cold wind was blowing. I didn’t know how many times I had tried but couldn’t get the car out. I remembered before leaving, Nancy Clay said that if you encounter difficulties, pray to God. So I prayed, and I tried maneuvering the car, but it still didn’t come out. I also grumbled to God that He didn’t help me when I was in trouble. But there seemed nothing I could do then so I prayed a second time. Yet my car still did not come out. I understood I had exhausted all that I knew and could at that moment but I couldn’t turn off the car in the cold weather. It was past eleven o’clock, and I couldn’t do anything.  At the same time, while the radio was playing the hymn song “Amazing Grace,” I thought about my past, came to God again, and started to pray. At this moment, my pride was no longer in me, and my heart was more submissive. When I opened my lips to call out and plead for  “Abba Heavenly Father,” I felt the Spirit of God enter my heart and that God is real and alive. And I have seen and reviewed my self-righteousness and my pride. There was a precise movement in me- I felt the cozy warmth while my hands pressed on the steering wheel.  After a long while I tried to reverse, but again the car wouldn’t move. Yet I have stopped complaining — no more impatience but calmness filled the air.

Thank God, a few hundred meters away, in the middle of the night, a family house suddenly turned on its lights, and someone came out. He walked up to my window and asked if I needed any help, and I said yes. So he went back and got out a few boards to put under the rear wheels, and the car came out of the snow bank at once. I was astonished by how fortunate I was. Now that I thought about it, it was the grace of God. He sent his angel not only to resolve my predicament at the time but also to lead me to the end of many human plans but the Spirit of God’s purpose prevail.

The next day I drove another nine hours arriving in Toronto. On the first Sunday, I was as excited as a long-time believer looking for a church. In the afternoon, I came to the Chinese Gospel Church (CGC) in Downtown Toronto. I joined their Mandarin Church Service and it happened in the afternoon. I have forgotten what Pastor Wilson Wong had said. But as he finished his sermon, he called and asked anyone who would come to believe in Jesus and become a child of God. There were only about 60 people at that service, and the Holy Spirit urged me to stand up. Thereafter, all the brothers and sisters came, surrounded me, shook hands, and hugged me. I felt the love as if it was of the Heavenly Father. God sent not only an angel to help me out of a problematic situation but changed my life. I realized then I was a sinner, a modest child, and when the Spirit of God shattered the strong shell of my reasons and knowledge and changed my heart, I was willing to put my life back to the Lord and let Him rule in me.

For Spiritual growth, since I started to read the Bible and listened to His Word, I began to have a better understanding of the attributes of God. I realized that God can create the universe, create the wonderful human body and give the spirit to living humans. He creates all and rules over all and puts the order in it. He also has control over everything, able to change and adjust any of them. Whatever people can’t do, I assume then God can’t do it either.  So, now those two questions are no longer a problem for me. The virgin birth and the resurrection of Jesus were trivial to God. The signs and miracles in the Gospels chapters are also manifestations of the power of God so we can get to know Him. Therefore, I have gradually come to realize that science has only limited knowledge and scope to reveal the wonders of God’s creation. We have to cease using science as our bias and defense and collapse the possibility to know the eternal and infinite attributes.

May you also have this living spring water and never thirst again!

(Eric and his wife Ping are missionaries sent to Cambodia by Gospel Operation International (Canada) gointl.ca. They are currently working on a mission in a remote village in the northern Cambodian province of Pursat. If you want to know more about them, visit their mission blog at pilgrimontheway.home.blog )